Decarbonization Avenue C2V - CO2 to Value All about CO2

Being a component of the atmospheric air, CO2 is everywhere on earth - and that is a vast ecosystem with which CO2 is in touch continuously.

Will it not be interesting to understand more about CO2’s interactions with the various elements of the earth’s ecosystem?

1. What is the CO2 concentration in the atmospheres of other planets in the solar system?

In the solar system, apart from earth, only Venus and Mars are known to contain CO2. The atmospheres of both these planets are almost full of CO2, with concentrations of 95% or higher.

Here are snapshots of the atmospheric constituents of some of the planets in the solar system. 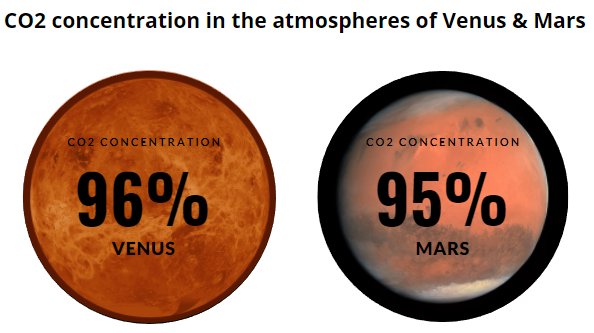 2. How much CO2 is present in the moon's atmosphere?

The three primary gases in the lunar atmosphere are neon, helium, and hydrogen, in roughly equal amounts.

Only small amounts of CO2 are present, along with methane, ammonia, and water.

3. Does the CO2 concentration in earth's atmosphere vary by specific regions?

For instance, concentrations of atmospheric carbon dioxide in the tropics have been consistently higher than those in other regions.

4. Does the concentration of CO2 in atmosphere vary with altitude?

As CO2 being denser than air, it can be expected that a portion of it will sink to lower levels of atmosphere.

The concentration of CO2 at lower altitudes should hence be higher than at higher altitudes. This has also been measured by various experiments and found to be true.

Estimates by CO2Meter suggest that CO2 concentrations will decrease about 3% for every 1,000 feet increase in altitude. So, at 5,000 feet, the concentration would be 15% lower than what it is at ground level.

5. Does the atmospheric CO2 concentration vary by seasons?

The amount of CO2 found in the atmosphere varies over the course of a year.

One of the reasons could be plant respiration, when they give out CO2. While plant respiration occurs throughout the year, it is higher during the colder months, resulting in higher CO2 levels in the atmosphere during those months.

6. What happens to the CO2 exhaled by fish and other aquatic species?

The CO2 exhaled by fish eventually ends up as calcium carbonate.

The calcium present in seawater combines with carbonate ions generated from the exhaled CO2 to produce calcium carbonate.

Yeast & fungi feed on sugar for their energy needs - these are called heterotrophs, as against autotrophs (plants) which can make their own food and energy.

Some types of bacteria called the aerobic bacteria use respiration to produce energy, which involves breathing in air/oxygen and releasing CO2 - similar to humans. Other types of bacteria are anaerobic - they respire without oxygen being present. Instead of using oxygen, these bacteria use other chemicals such as nitrates, and sulfates, and even in some cases CO2 to produce the energy they need.

Lichens are similar to bacteria in their scope and functions.

Microalgae are the only class of microbes in which all species take in CO2 - like plants - and give out oxygen.

Viruses are funny creatures - they neither capture nor store energy themselves, but rely on the host cells for their energy needs.

8. Do oceans absorb CO2? What happens to the CO2 absorbed by them?

Oceans cover over 70% of the earth's surface and play a critical role in capturing CO2 from the atmosphere.

In fact, oceans are the largest sequesters of CO2 on earth by far.and can be considered one of the largest natural 'carbon sinks'.

CO2 in various layers of the ocean

A major portion of this CO2 remains deep in the oceans.

From the ocean surface to depths of about 500 meters, CO2 exists as a gas and as CO2 is less dense than sea water at these shallow depths, a large portion of it rises in the water.

At depths below 500 meters, CO2 exists as a liquid. Below depths of 3000 meters, the liquid is so dense that it is heavier than the water surrounding it and sinks to the bottom. Once it reaches the bottom, the CO2 stays there, trapped by its own density. It is possible that oceans currents could bring up some of the CO2 at the floor to the top, but studies suggest that might not be a lot.

As a result, normal rain is slightly acidic and has a pH of about 5.6.

10. How much CO2 is sequestered in the world's soils?

By some estimates, plants and soils together currently absorb an estimated 30 percent of the CO2 emitted by human activities each year. A study done in 2020 estimated soil restoration and protection could absorb as much as 5.5 billion tons of CO2 every year ( Source - Phys.org).

Soils sequester CO2 mainly through capturing and storing the CO2 released from the decomposed plants. While a portion of the CO2 from the dead and decomposed plant could be emitted into the atmosphere, a significant portion stays back in the soil.

The dynamics of the underground portion of this carbon sink in the coming decades is important because carbon absorbed by soil tends to stay there for a long time - this could be as long as centuries or even millennia. However, if human activities disturb these large carbon sinks, the sequestered CO2 could be released into the atmosphere. 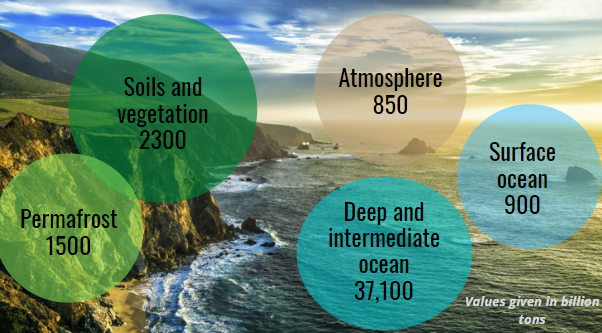 11. What is permafrost and how much carbon does it store?

Permafrost refers to a layer of soil below the earth's surface that remains below freezing point throughout the year - it has to remain continuously frozen for at least two years to qualify as permafrost.

Its depth can range from just a few meters to over 1000 meters (a kilometer). Permafrost mostly occurs in polar regions, and within that, a vast majority in the northern hemisphere - it covers about 25% of northern hemisphere and about 17% of the earth's total exposed land surface. In addition being present in vast parts of Alaska, Canada and Russia, it is also present in mountains across the world - the Alps, Himalayas and the Andes.

Apart from its large presence, what is of special interest to us is the massive amount of carbon stored in permafrost. For most of human history, permafrost has been Earth's largest terrestrial carbon sink, trapping plant and animal material in its frozen layers for centuries. It currently stores about 1,500 billion tons of carbon. That is a lot more than the total amount of CO2 present in the atmosphere - about 850 billion tons. 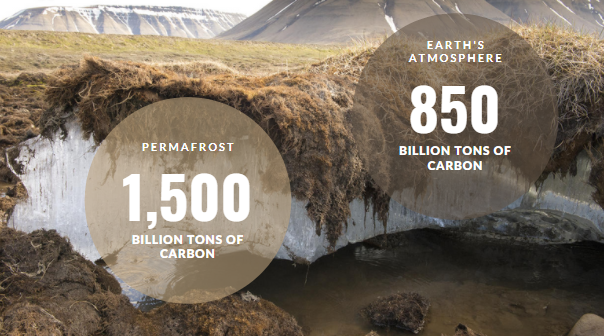 12. Are there naturally occuring events and phenomena that give out CO2?

Outside of CO2 exhaled through human and animal respiration, many naturally occuring events and phenomena release CO2 on earth,

Some of the prominent natural phenomena that release CO2 include outgassing from the ocean, decomposition of vegetation and other biomass, volcano eruptions. emissions from sedimentary basis and wildfires.

Interestingly, studies have found that volcanoes release CO2 not only during eruptions, but also when they are dormant, during which period they release CO2 through non-eruptive diffuse degassing.

13. What is the relationship between CO2 and coral reefs?

Coral reefs can be under threat if atmospheric carbon dioxide levels continue to rise.

And this is why. When CO2 dissolves in the ocean, it raises the water's acidity level. Excess amounts of CO2 in seawater can raise it acidity levels to a level that prevents a build up of calcium carbonate, which corals need to build their skeletons. 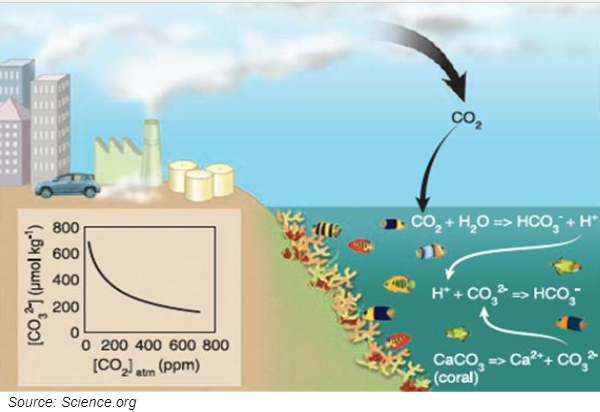 14. When plants and trees die, what happens to the CO2 stored in them?

As plants & trees die, some of the carbon becomes locked in the soil, while most of the rest is emitted back into the atmosphere.

15. Why does fermentation give out CO2?

The overall process of fermentation is to convert sugar to alcohol, with the by-product being almost pure CO2.

The reactions that make this happen are complex but the simplified process is as follows:

During composting, microbes carry out decomposition of organic waste in aerobic conditions - that is, the process operates in the presence of air and the microbes convert the organic waste into soil-enriching compost. The other end products from this process are carbon dioxide, heat and water.

Pyrolysis refers to heating of organic matter in the absence of air. Biochar from biomass is made using this process.

Pyrolysis emits both CO and CO2

Freshwater rivers and streams transport or store a large amount of carbon each year (some estimates put it at about 100 million tons per year). Some rivers - especially  glacial rivers - could absorb CO2 at a rate even higher than of rainforests.

Most of this carbon ends up in the ocean, in the sediment at the bottom of lakes and reservoirs, or in the atmosphere as a greenhouse gas. A river could also release significant amounts of CO2 to the atmosphere if its ecosystem comprises high levels of organic matter decomposition.

CO2 absorption by lakes and ponds

One study found that small ponds sequester 79-247 g of organic carbon per square meter annually, 20-30 times higher than woodlands, grasslands and similar habitats. While ponds and lakes together would occupy areas much smaller than those occupied by forests and grasslands, much higher rates of intake imply that their overall contributions to carbon capture could be significant.

Some studies have estimated that approximately 30% of the total CO2 emissions from cement production are being absorbed by concrete structures over their lifetimes. The sponge effect is a result of a slow process called carbonation that takes place as the lime in the cement reacts with CO2 from the air over the years.

Research has indicated that coating concrete roads with materials such as zeolite could result in these roads absorbing even more CO2 than they normally would.

Through natural weathering, rocks absorb CO2, and a lot of it - by some estimates, about 1 billion tons per year globally.

Carbon dioxide mixes with rain and causes the weathering, or breakdown, of rocks. This sets in motion chemical reactions that remove CO2 from the atmosphere and stores it as minerals in the rocks.

If the climate gets hotter, the weathering process gets accelerated and more CO2 gets captured. It's the reverse when the climate gets cooler so there's lesser CO2 absorbed by rocks and a higher CO2 buildup in the atmosphere. In this manner, weathering has possibly helped control earth’s temperature for a large part of its history.

Metal oxides and metal hydroxides can react with CO2 to form other compounds.

Let us know your feedback about All about CO2 by sending a note to the CO2 Gang - co2gang@clixoo.com